SMEs in North of England under significant financial distress

By Richard Adams21 July 2022No Comments

While small and medium sized enterprises in the North of England saw performance improve in the last year, the region’s low level of financial strength has left many in a perilous position for the coming months. A new study has found that many more mid-tier firms in the North are facing acute levels of distress than the national average – a trend which is particularly pronounced in the North West.

Initially proposed by the 2010 Coalition Government, the Northern Powerhouse scheme aims to bolster historically neglected regional economies beyond London, particularly in the “Core Cities” of Manchester, Liverpool, Leeds, Sheffield, Hull and Newcastle. Since its formal launch in September 2016, the project has worked to champion policy ideas aimed at improving quality of life, economic regeneration, and to promote the north as a place to work, study, live and invest.

Six years into the Northern Powerhouse scheme, however, it remains up for debate whether it has significantly strengthened the region’s economy. According to recent research by business advisory firm Quantuma, the post-lockdown period has seen distinctly middling growth in the North. By the firm’s reckoning the SMEs in the region obtained a ‘growth score of 49, and while this is significantly stronger than the 43 scored by London, it is well behind Scotland, the South West, Wales, Midlands and the East of England. 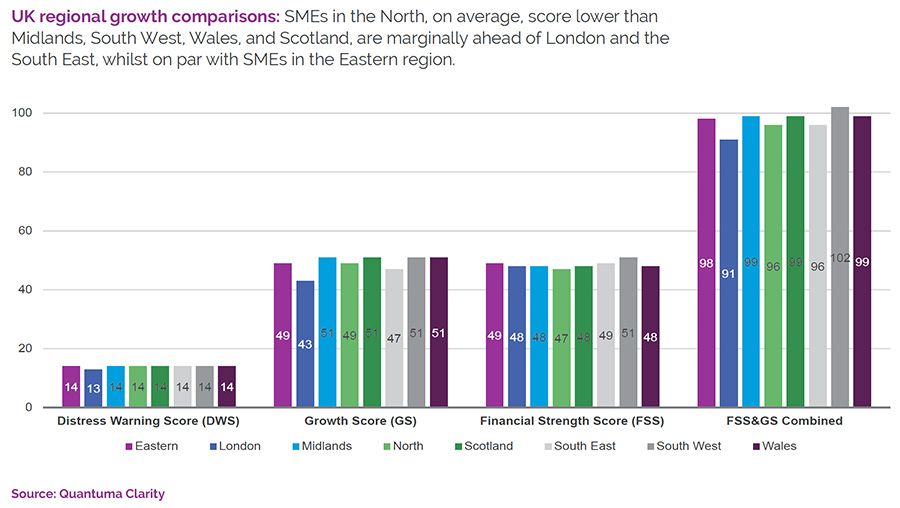 And though the North might be growing faster than London on this basis, it has the lowest ‘financial strength score’ of the UK. Much of the economic activity in the North was driven by a strong manufacturing sector, while other sectors with strong growth performance include construction, education, agriculture, retail and wholesale. With the UK’s economy encountering major headwinds, however, as demand falls the North’s comparative financial weakness may see these gains quickly dissipate.

Frank Ofonagoro, Head of Quantuma’s financial advisory team in the North West, commented, “Like many other parts of the UK, the North of England has experienced unprecedented levels of distress in the last two years and while it is encouraging to see some of the positive insight on SME growth there are more challenges ahead for the North West business community. For those businesses that are facing increased pressure on cash flow and their balance sheet, the earlier they review and diagnose the reasons for underperformance, the more time they will have to identify and implement relevant recovery options.”

The level of businesses which are in distress across the North is already much higher than in the rest of the UK. Even though Quantuma found that the number of SMEs identifying as suffering lower levels of stress – between 4% and 8% – was slightly lower than the UK average, the number exposed to higher levels of stress were significantly higher.

The number of SMEs in the North experiencing 8% to 15% distress ramped up at the start of 2022, as the national average fell. This was particularly pronounced in the North West, where around 4,000 firms identified as this level of distress. And while the number of SMEs in the most acute distress of 15% to 25% fell in the North West at the same time to around 2,000, it remains much higher than the national average – even as that figure rises.

This is placing a large number of jobs in jeopardy – especially in the North West, which has for the longest time been heralded as the leading light of the Northern Powerhouse project. According to Quantuma, of the workers working at firms under financial distress, 95% in Manchester are working in the category of 8% to 15%.

Manchester and neighbouring Salford have fast become Britain’s leading technology hubs in recent years. With many start-ups and SMEs having flocked to the area for this reason, however, many companies could face destabilisation if the region’s economy continues on its current track.