By Richard Adams18 July 2022No Comments

Smart factories are growing targets for cyberattacks, according to a report. Despite half of smart factory operators expecting more cyber attacks in the next year alone, many are still proving slow to ramp up cybersecurity.

Smart factories focused on a range of technologies are touted to rapidly improve output efficiency and quality through increasingly advanced, often automated, production cycles. Due to the potential gains touted for smart factories, considerable investment has already poured into such initiatives. A recent survey by Plex Systems finding that across the manufacturing sector, smart manufacturing adoption grew by 50% in 2021, while 83% of industry leaders identified smart manufacturing as key to their future success.

As with any level of digitalisation, however, smart factory adoption comes with risks – and most notably, opens firms up to cyberattacks. A new survey from Capgemini has found that of 950 manufacturers, 68% now have smart factory initiatives. Of those, 40% have already been targeted by hostile attacks – and nearly three-quarters of those were in the last year. In other words, as smart factories become more common, they are becoming more popular targets for cyber criminals.

One reason for smart factories being a target in the first place is that they are in the vanguard of digital transformation programmes at scale. By being easily identifiable as early adopters, criminals are aware that smart factories may have missed areas of weakness in their defences – particularly if they are not accustomed to cyber-attacks.

Geert van der Linden, Cybersecurity Business Lead at Capgemini said, commented, “The benefits of digital transformation make manufacturers want to invest heavily in smart factories, but efforts could be undone in the blink of an eye if cybersecurity is not baked-in from the offset. Unless this is made a board-level priority, it will be difficult for organizations to overcome these challenges, educate their employees and vendors, and streamline communication between cybersecurity teams and the C-suite.”

This is a major concern, given existing strains on local and global supply chains. In spite of that, and while 79% of decision-makers think smart factories are at particularly high risk, this isn’t translating into concerted remedial action. 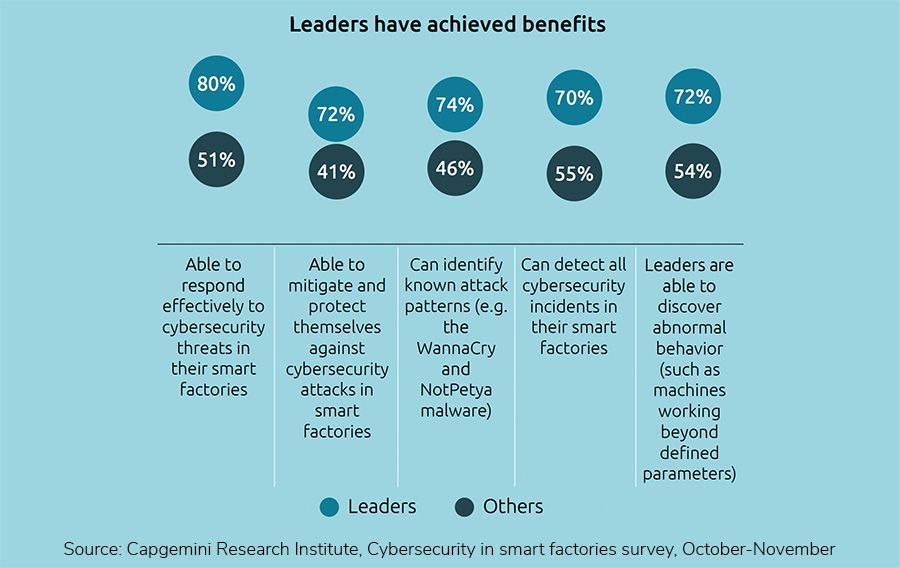 A lack of C-suite focus, limited budget, and human factors are noted as key cybersecurity challenges currently holding back manufacturers’ security efforts. However, if they can forge ahead, Capgemini found that firms which deploy mature practices across the critical pillars of cybersecurity: awareness, preparedness, and implementation of cybersecurity in smart factories, outperform their peers in multiple aspects.

Showing the opportunity available, Capgemini found that benefits for 74% of leaders included recognising attack patterns at their early stage of deployment, while 72% saw a reduced impact of these attacks. In comparison, all other organisations adopting cybersecurity measures only saw a 46% success rate in recognising attack patterns early, meaning only 41% reduced the damage of such attacks.