By Richard Adams7 July 2022No Comments

With the delayed Euro 2022 having finally kicked off with England beating Austria, many anticipate the hosts to perform strongly at the tournament. While winning the competition will prove difficult, a new study has suggested that the Lionesses have a 93% chance of at least outlasting the group phase.

Football is coming home. At least, in the sense that an international tournament is being hosted where the regulatory skeleton of the modern sport were born. The 2022 edition of the UEFA Women’s Football Championship will be hosted at stadiums across England, throughout July.

The 13th incarnation of the Championship sees UEFA’s showpiece tournament return to England seventeen years after it last hosted the tournament. A lot has changed since 2005, though – and not just the format of the competition. That tournament was the last to feature just eight teams, making its group phase – a de facto quarter final – very difficult to survive. 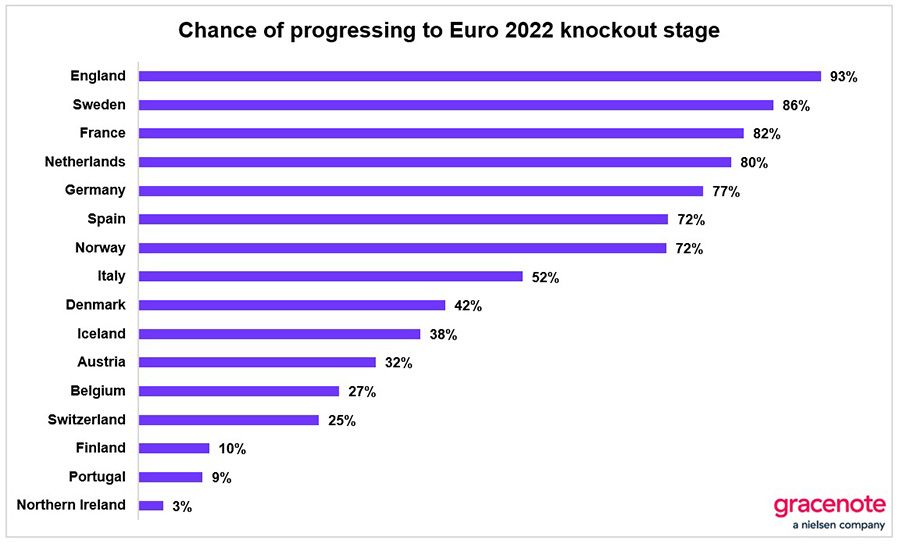 On that occasion, despite winning their first game against Finland via a late goal from Karen Carney, England fell short. But in the decades following the spectacle, women’s football has grown drastically in England. Following large grassroot investments, and domestic clubs increasing treating the sport as a potential source of prestige, the Lionesses squad now possesses a level of experience, confidence and ability that makes them genuine contenders. At least, if new analysis from Gracenote is to be believed.

The Nielsen company ran approximately 1 million simulations of Euro 2022, weighing up the prospects of each team, match by match. According to Gracenote, the tournament “looks to be wide open”, with strong contenders like Olympic silver medallists Sweden on an upward incline, while incumbent champions the Netherlands go into the tournament amid stuttering form, and Spain have just lost Ballon d’Or winner Alexia Putellas to injury. But in 21% of the firm’s simulations, it was England who went on to lift the trophy.

With this in mind, as well as the fact the groups have become slightly easier to navigate by the inclusion of lower-ranking teams such as Northern Ireland, Gracenote is all but certain that the Lionesses will outperform their last tournament on home soil. In 93% of scenarios, the firm predicted England would qualify from the group stage – again a higher proportion than any other team. 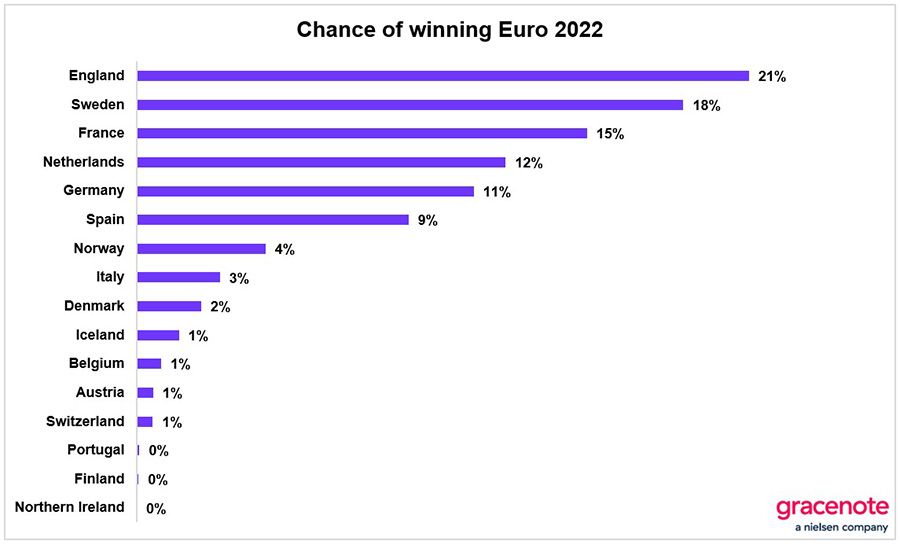 Simon Gleave, Head of Sports Analysis at Gracenote, stated, “England’s Group A opponents are ranked 11th (Norway), 21st (Austria) and 47th (Northern Ireland) in the world on the latest FIFA ranking… According to our pre-tournament estimates, England begin Euro 2022 as favourites according to our simulations of the competition, with a 37% chance of making it to the final.”

That is not to say anything is a foregone conclusion, of course. England are in a group alongside Norway, whose side features a reinvigorated former Ballon d’Or winner, Ada Hegerberg. Meanwhile, fellow Group A competitors Austria will cause uncertainty in the group even beyond England’s slim 1-0 opening win against them. The team boasts lethal Hoffenheim striker Nicole Billa – who has scored 43 goals in 79 appearances for the national side. Indeed, England will be wary that though they opened the 2005 campaign with a slim win over Finland, it was the Nordic nation who ultimately advanced from the group, while England finished bottom.

But aside from the talent on display, England will also be banking on the team’s new leadership as a differentiator when it comes to tournament success. Since the Lionesses’ last outing at a tournament, Phil Neville has departed as Manager, and been replaced by Sarina Wiegman. She led the Netherlands to glory at the last Euros, held in 2017, before also taking her country to the World Cup final in 2019. As England looks to take its women’s game to the next level, her tactical nous and experience of success may prove vital.