By Richard Adams4 July 2022No Comments

As UEFA beefs up its financial regulations for European football, clubs will soon be required to ensure their employee expenses are less than 70% of revenue. While this was previously a recommendation under Financial Fair Play, the new rules will see this become a requirement.

Financial Fair Play (FFP) was introduced by European football’s governing body, UEFA, in 2011, as it aimed to stop clubs involved in European competition from spending more than they earn. The basic principle was that, beyond a small loss, initially set at €5 million over three years, clubs’ outgoings must match their income.

Whether FFP might be deemed a ‘success’ is a matter of fierce debate. While it initially curtailed losses clubs were willing to risk for the possibility of on-pitch success, by 2017, English Premier League (EPL) football clubs were recording combined pre-tax losses of £110 million per year – and that was even before the Covid-19 downturn hit football’s top table. Club finances across the Big Five leagues are now at a tipping point, where huge losses will soon become untennable. 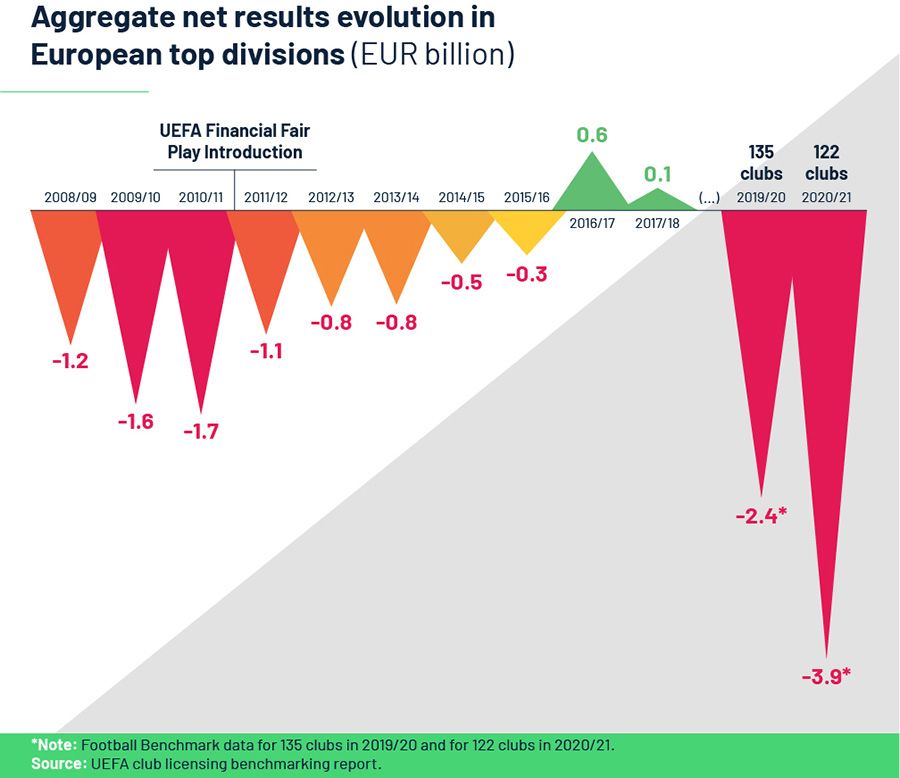 At the same time, several members of European football’s nouveau riche were able to find ways around the FFP rules. 2020 saw Manchester City fined €30 million and banned for two seasons from the Champions League by UEFA , for alleged “serious breaches” of FFP rules. The club was found to have overstated sponsorship revenue and break-even information in accounts submitted to UEFA between 2012 and 2016.

However, as the breaches were found to be time-barred, the Court of Arbitration for Sport (Cas) overturned the ruling – and reduced City’s fine to €10 million. The ruling was said by many critics to have left FFP rules ‘dead in the water.’

Two years later, that has been all but confirmed, with the news UEFA replacing FFP with a new set of regulations around football clubs’ governance, economic and financial parameters. The Club Licensing and Financial Sustainability regulations will come into force in the 2022/23 season, through a gradual implementation process of three years, allowing clubs to adapt.

According to UEFA , the new, augmented regulations respond to the devastating impacts of Covid-19 and the fast evolution of the football industry over the past ten years. Among others, the new system enhances and reinforces FFP’s key parameters, the “absence of overdue payables” and the “break-even rule” through its new pillars of “Solvency” and “Stability”.

However, it also adds a new “Cost Control” pillar, in response to increasing player wages, agents and transfers’ costs potentially threatening clubs’ sustainability in the long-term. The new pillar is based on the ”squad cost ratio”, namely a ratio between total costs associated to the squad and clubs’ total income. This will be phased in from the 2023/24 season. 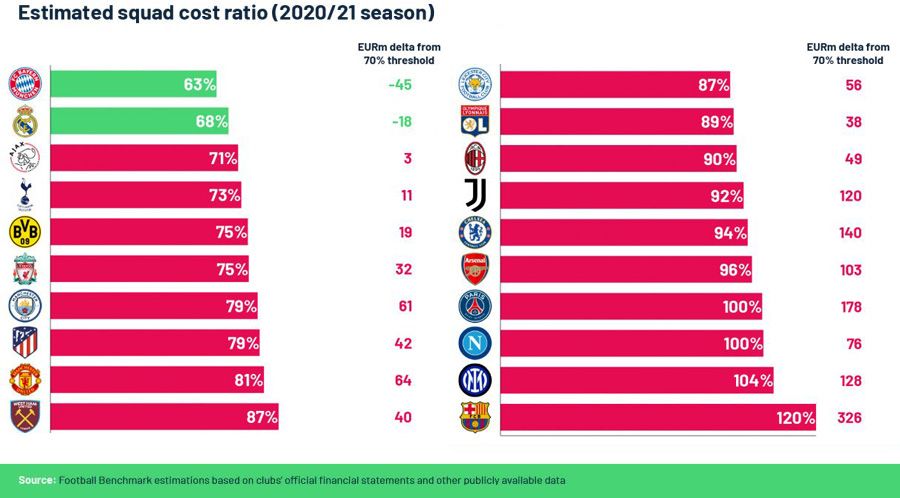 The biggest change here is how that is enforced. While the old FFP rules referred to staff-cost-to revenue ratios, this was only as a recommendation. The new regulations will enforce a strict requirement for clubs to keep total employee expenses below 70% of total operating revenue. At present, the average squad cost ratio of 20 European elite clubs analysed by Football Benchmark grew to 86% in 2021 – leaving them a large amount of ground to make up to adhere to the phased in 2024/25 threshold of 80%.

Commenting on the changes, Football Benchmark CEO Andrea Sartori, suggested the changes will most likely succeed due to this new level of strictness. Even though some of the rules will not be phased in immediately, in order to comply with the rules, he advised clubs to act sooner rather than later.

Sartori noted, “Obtaining simultaneously the long-term financial sustainability of clubs and a sufficiently high level of competitiveness of national and international competitions, is an absolute must for rightsholders – this to ensure the long-standing interest of fans, attracted more and more in the digital era by a variety of alternative entertainment options.”