Millions of residents in the UK living with Long Covid

By Richard Adams24 June 2022No Comments

New data suggests that around two million people in the UK may be living with Long Covid. The number of people suffering a severe, lingering impact from the coronavirus pandemic is now at its highest since official surveys began – and is almost double the rate of this time last year.

When the Omicron variant of Covid-19 first emerged in late 2021, some people saw it as a way out of the pandemic. Compared to previous strains, it seemed to be less aggressive. While some people still required hospitalisation, and could die from the infection with the emerging variant, that number was smaller than previous models.

Throughout 2022, governments around the world have acted according to this belief – finally halting their attempts to control the spread of Covid-19, and instead moving to a “living with Covid” policy. 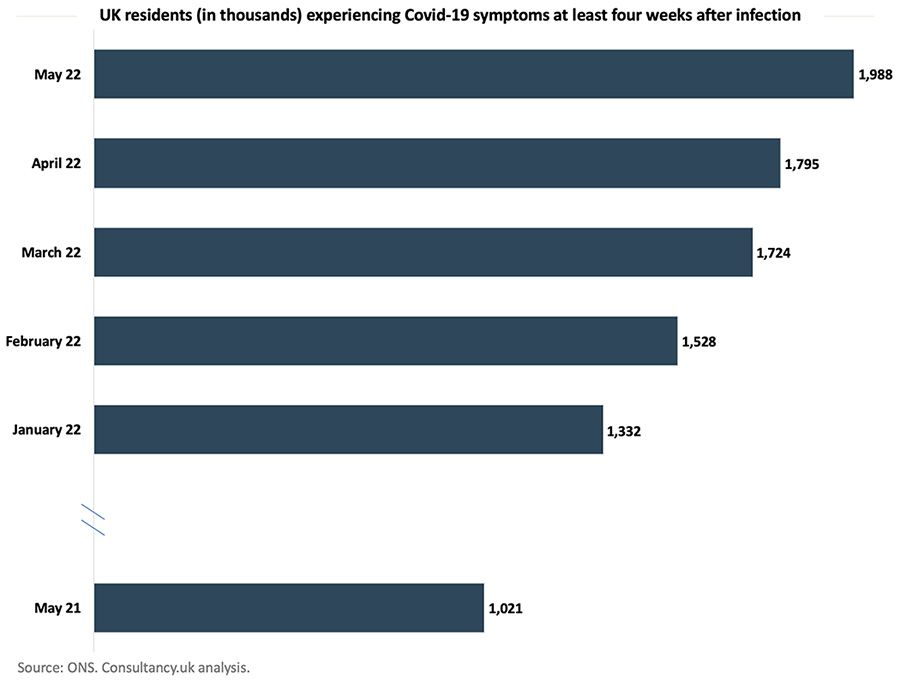 New data from the ONS shows that those decisions came with severe consequences, however. While the Omicron strain seemed ‘milder’, one aspect of its impact – its potential to leave its hosts with long-term symptoms – did not diminish.

Covid-19 initially causes a period of acute illness. Long Covid occurs after this phase, when rather than simply recovering, some people continue to experience symptoms, such as breathlessness, muscle aches and fatigue, for months or even years. This has placed an increasing strain on the workforce – and subsequently the businesses still struggling to fill vacancies – as millions of people have been rendered incapable of work for an unknown period of time.

Figures from the Office for National Statistics suggest that, as of May 2022, 1.98 million UK residents were suffering with Long Covid, at least four weeks after their first suspected coronavirus infection. This is around 3.1% of the population, and of those, around two-fifths, or 826,000, said infection had been over two years ago.

Worse still, around one-in-five said that their infection had been more than two years ago. This shows not only that the majority of Long Covid cases are likely from Omicron infections, but also that the phenomenon could see many of those infected for extended periods of time.

The 10 most common Long Covid symptoms endured by those afflicted typically limit their capacity to perform work. More than 1 million people reported being weak or tired more than four weeks after infection, for example, while more than 632,000 reported shortness of breath.

Some 400,000 had difficulty concentration, and 335,000 reported regular memory loss or confusion. All this led 71% of those with Long Covid to state their symptoms had a negative impact on their day-to-day activities, and one-fifth said their ability to undertake activities had been “limited a lot”.

The data suggests that Long Covid is not simply going to fade away, even as many organisations now insist on terming the present period as the “post-pandemic era”. The lingering impact of Long Covid is subsequently going to expose major policy shortcomings in the coming months, if companies and the Government do not adapt their expectations of workers with symptoms. 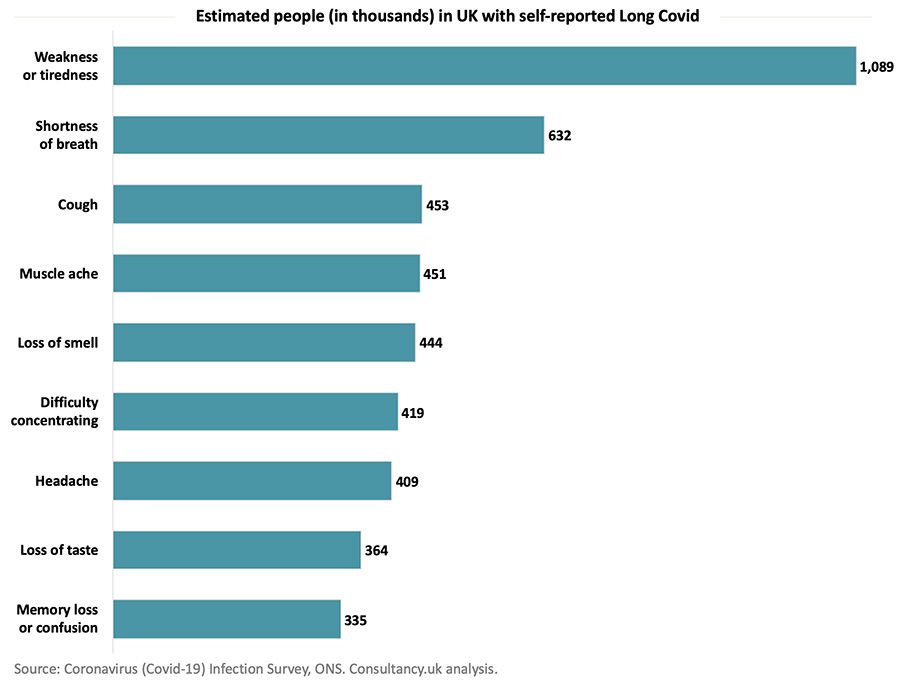 Illustrating this, a recent employment tribunal recently ruled that Long Covid is a disability. In what employment experts have called a landmark employment tribunal ruling, Terence Burke – a former charity caretaker, dismissed from his job after suffering from Long Covid – has been given permission to bring a case of disability discrimination against his former employer. In its judgment, the panel concluded that the coronavirus had rendered him with “substantial and long-term” side effects.

Burke will now bring his claims of unfair dismissal, disability discrimination, age discrimination and failure to pay redundancy payments to a final tribunal hearing. He is thought to be the first person in the UK to successfully claim that Long Covid is a disability under the Equality Act.

Speaking to the Telegraph on the matter, Nick Le Riche, Partner at law firm BDP Pitmans, predicted this ruling would be “relied on by employees who are suffering in a similar way”. Meanwhile, employment specialist from Vinson and Elkins, Martin Luff, added the ruling “could have a potential snowballing effect which may lead to a significant increase in the number of claims.”