By Richard Adams15 June 2022No Comments

Do leaders matter in mergers & acquisitions? Of course they do – Max Wright (a Senior Director at WTW) explains why dealing with target leadership teams is a deciding factor for transaction outcomes, and what acquirers can do to get it right.

Company leadership is universally understood to be a critical part of a deal’s success or failure. After all, along with looking at synergies, financials, product and service outlooks and so on, assessments of potential strategic acquisitions also include an assessment of the target’s leadership team.

But how much does leadership matter? In one WTW survey on human capital issues in mergers & acquisitions , acquirers rated “influencing the effectiveness of senior leadership” as the biggest difference between very successful and less successful deals.

Additionally, employees rank leadership as the first- or second-most important driver of employee engagement in companies undergoing significant changes, according to the results of another WTW study .

What leadership issues should acquirers focus on during M&A?

To some degree this depends on the deal objectives. For example, operating an acquired company independently without any integration is different from combining the acquiring and target companies into a best-of-both organisation.

The roadmap below provides a starting point for the tasks and decisions to consider during an acquisition. 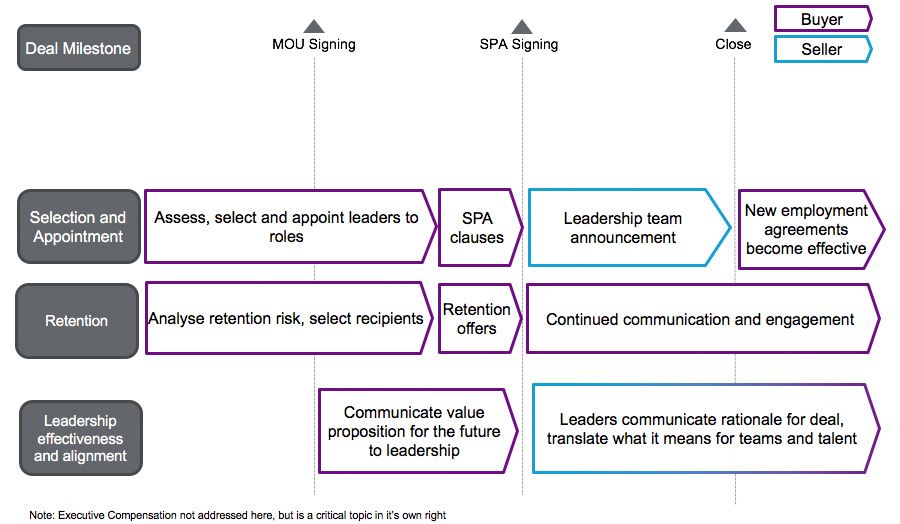 Necessarily generic, this roadmap should be adjusted to the unique circumstances of each deal, but there are arguably two principles in particular to consider.

Timing of leadership selection and appointment
Usually sooner is better than later when identifying the new leadership team. Take the example of a financial services company that purchased a competitor’s business unit and needed to select a new combined leadership team. The target leadership team knew that a few of them might be needed in the new company, but most would likely be let go.

Consider the impact to the acquired business if the financial services company had waited until after the deal closed to appoint the leadership team or begin a selection process. Leaders are worried and distracted, and these feelings flow through to customers and employees – and ultimately business performance.

In the roadmap outlined, the selection and appointment process for the top team finishes at the time of deal sign and announcement.

Approach to leadership retention
How you retain leaders requires an assessment of the departure risk and coordination of different retention measures. In the case of a construction and engineering firm entering a new region, retaining the existing leadership team was vital to operating the target and identifying new growth avenues.

As part of its letter of intent, the construction and engineering firm included a retention payment budget as part of its offer, with the way it was distributed to leaders and key employees being mutually decided. This was in addition to the earnouts the target leadership received as part of the sale.

Early alignment of the leadership team
Before the deal closes, the acquiring company can influence business performance via the target company’s leadership team. In the case of a chemicals company that bought a carveout business, a long period between sign and close was required to allow the seller to complete the carveout process. A new organisation design combined with internal recruiting from the parent company was required.

The chemicals company knew that if the members of the target leadership team had their immediate needs met, they quickly would be open to learning and partnering on the future vision of the new owner. Business performance was less likely to suffer while they waited for deal close, and more favourable carveout decisions might be achieved.

Just prior to deal sign, the chemicals company appointed all executives to roles via employment contracts conditional on close with new compensation and retention plans incorporated.

Sale and purchase agreement (SPA)
Buyers can also address leadership retention risk through clauses in the SPA. In the case of a financial services company buying into a new country, retaining the existing management team was vital to gaining a sustainable foothold in a new market. The company named the retention of key executives as a condition precent to deal close, along with an 80% threshold for retention of direct reports to the executive team.

Although they took positive actions to engage the target leadership team early, this provided a backstop if leaders and talent did not see a future with their proposed new owner.

Every deal is different, but what the acquirer puts into the deal and how they address these common leadership issues will determine the value that comes out of it.