Most consumers do not trust cryptocurrencies

By Richard Adams12 May 2022No Comments

The tumultuous cryptocurrency market continues to attract investors from around the world – chasing an unlikely jackpot amid scams and regular value collapses. The market’s famous volatility seems to be putting many more people off, though, with 28% of consumers stating they have “no confidence” in the technology, and a further fifth stating they are wary it is plagued by scams.

In 2018, one of the few economists to have predicted the 2008 financial crisis provided US senators with a stark warning. Speaking to a congressional hearing on Capitol Hill, global economist Nouriel Roubini did not mince words, when describing cryptocurrency as “the mother or father of all scams and bubbles,” and added that Bitcoin’s underlying technology, blockchain, was the most “over-hyped – and least useful – technology in human history.”

Roubini’s prepared testimony went on to call out “scammers, swindlers, criminals, charlatans, insider whales and carnival barkers (all conflicted insiders)” who he said tapped into “clueless retail investors’ FOMO (‘fear of missing out’),” then took them for a ride with pump-and-dump schemes for “scammy crappy assets at the peak that then went into a bust and crash – in a matter of months – like you have not seen in any history of financial bubbles.” 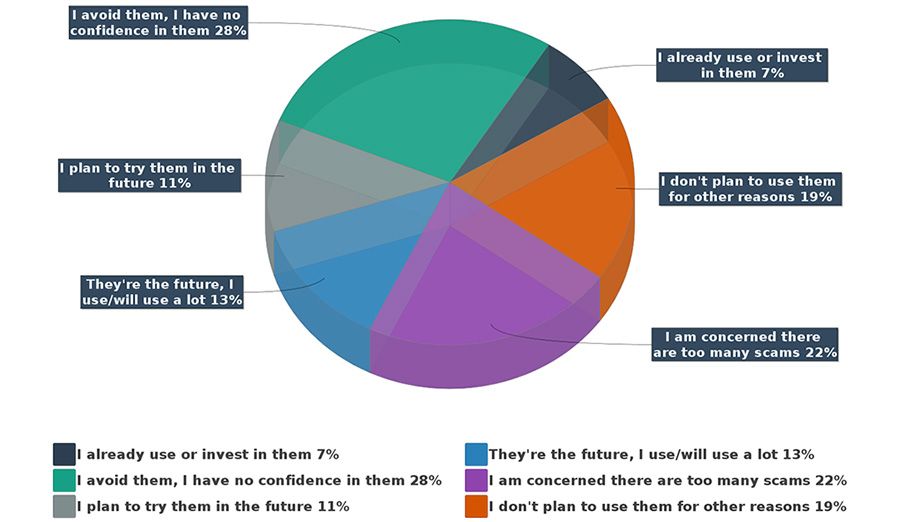 After the dust from this apocalyptic testimony settled, though, many of its warnings ultimately went unheeded. Tech-evangelists continued to hype the ‘potential’ of blockchain – which is still yet to live up to any of it – while the promises of unbelievable returns continued to attract millions of speculative investments. In many cases, the returns were utterly believable, however. The decentralised, legally opaque technology made it easier than ever for scam artists to rope inexperienced investors, before pulling the rug from under them.

While for some time, proponents of cryptocurrency shrugged this off as blips in the ‘nascent stage’ of the technology, as more than a decade had passed, people’s willingness to accept this has decreased. Now, a study from Droid Mobile Consultancy suggests that only a minority of the public trusts cryptocurrency to consider investing in it.

Around 28% of those surveyed said they had no confidence in the technology and would avoid it, while an additional 22% were concerned cryptocurrency had too many scams. A further 19% said they did not plan to use cryptocurrency “for other reasons”. In contrast, only 31% said that they either used or would use cryptocurrency – with a diehard 13% insisting “they are the future, I use/will use them a lot”. 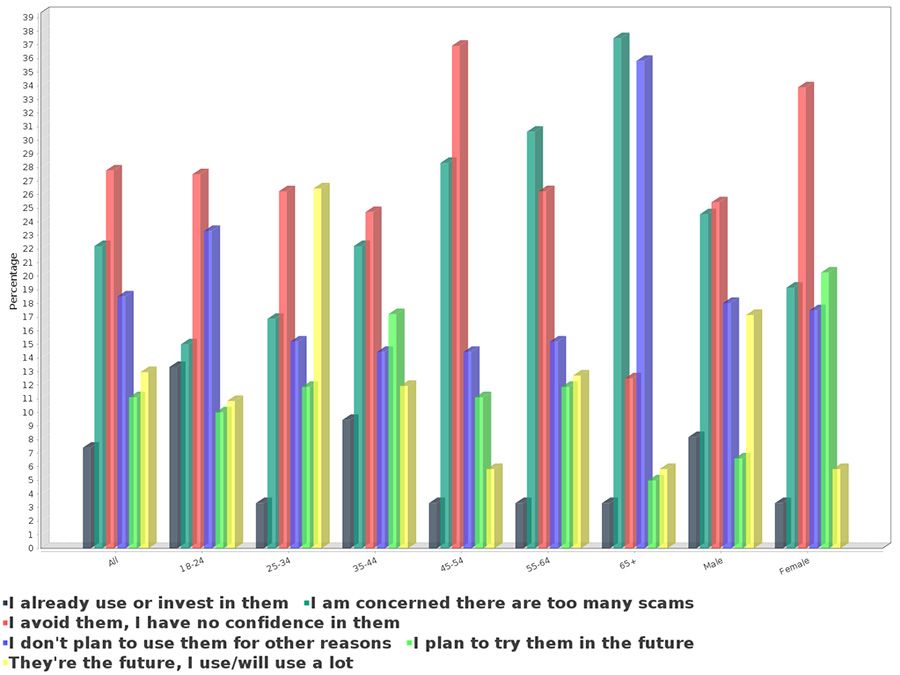 Interestingly, these views were played out across a number of demographics except for one. The same number of respondents aged 25-34 suggested cryptocurrency was “the future” as those who suggested they had “no confidence in them” – both at around 27% of respondents. Meanwhile, both men and women were mostly distrustful of the technology. However, men were more susceptible to crypto-hype, with 17% suggesting it was “the future”, compared to around 6% of women. And women were most decidedly against the use of cryptocurrency, at 34%, in contrast to 26% of men.

The findings come as Luna – a so-called ‘stablecoin’ is making headlines for having tanked by 85% in a day. A stablecoin is a cryptocurrency designed to have a relatively stable price, typically through being pegged to a commodity or currency or having its supply regulated by an algorithm – and one a growing number of central banks are weighing up – and Luna’s chaotic performance demonstrates that even these elements of cryptocurrency are not particularly useful as value-stores in their present form.

Meanwhile, cryptocurrency crime had a record-breaking year in 2021. A report released this year from blockchain data firm Chainalysis found scammers took $14 billion worth of crypto in 2021 – almost twice the $7.8 billion of 2020. These included the infamous ‘Squid Game’ scam, which cashed in on a hit Netflix series, before investors alleged its SQUID cryptocurrency token and related immersive online game were actually just an elaborate scam. Investors claimed the developers disappeared after the currency skyrocketed in price and seemingly cashed out with more than $3 million.