By Richard Adams29 April 2022No Comments

A new study into the impacts of the world’s net zero transition has found that it necessitates a mass shift of the workforce between roles. While jobs in the fossil fuels sector will be decimated, millions of new roles will go live in agriculture and power generation work, necessitating a huge campaign to re-skill workers for the transition.

Based on an analysis of specific economic transformations likely under a given hypothetical net zero transition scenario from the Network for Greening the Financial System (NGFS, a an organization set up by central banks and supervisors in December 2017 with the goal of strengthening the global response to climate change), McKinsey & Company has noted that the world would need to invest around $275 trillion in cumulative investments over 30 years. This is around $25 trillion more than the Current Policies scenario.

The sum is a 60% increase on current investment levels and equivalent to half of global corporate profits. At the same time, the report warns that the economic transformation will affect every country and every sector, with those most reliant on fossil-fuel-burning experiencing the most change. Meanwhile, the transition will be front-loaded with further expenses – for example, the cost of electricity rising (though falling back again later). As electricity prices continue to surge as it is, such admissions will fuel further assertions by critics that the economy “can’t afford” the net zero shift.

However, McKinsey argued that no economy can afford not to act. The effects of climate change will likely affect the global population unevenly; but ultimately no economy is too large to come away unscathed. By the calculations of McKinsey, in a 2.0°C warming scenario, more than half the world’s total population could be exposed to at least one climate hazard – which include heat stress, agricultural drought, flooding, and urban water stress – with the US seeing 160 million people (around 40% of the population) directly impacted, alone.

In this context, while the transition to net zero is seen by many as a massively disruptive process, failing to act now will only serve to guarantee far greater disruption and damage in the years to come. McKinsey’s analysts added in the report that while “the transition would bring substantial shifts in demand, capital allocation, costs, and jobs, which will be challenging to a wide range of stakeholders”, the costs and dislocations that would result from “a more disorderly transition to net zero emissions” would likely be “far greater,” while transitioning now would prevent “the further build-up of physical risks.” 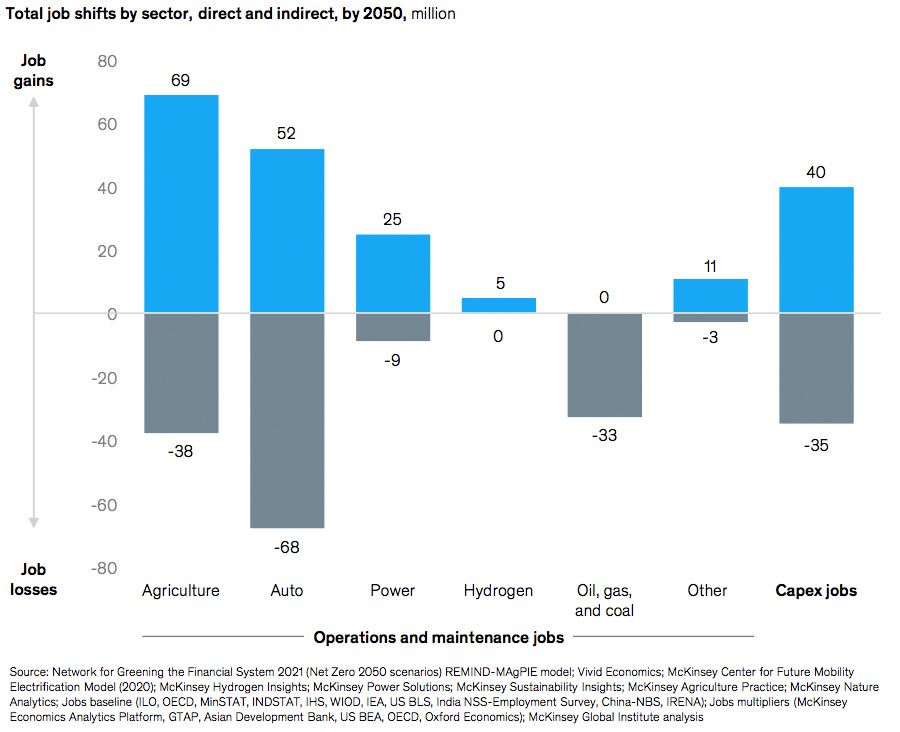 The strategy firm, which advises some of the world’s largest companies and governments, added that there are not only challenges presented by the transition, though. There are also opportunities.

Looking particularly at the impact going net zero by 2050 would have on the jobs market, McKinsey found that the move would necessitate a mass shift of labour between sectors. In particular, the shift could lead to a loss of 33 million jobs in the oil, gas and coal sector, and 68 million in automotive production. However, the greening of the automotive sector would create 52 million new roles there, while agriculture and the power sector would see huge net gains in the number of roles created.

This huge migration of human resources will necessitate a colossal collective effort to re-train those employees. At the same time, it will create a net growth in jobs – presenting a major opportunity for the global economy to flourish in the long term. By McKinsey’s reckoning, the changes would bring about 200 million direct and indirect jobs gained, in contrast to the 185 million lost by 2050.