By Richard Adams11 April 2022No Comments

Half of UK consumers would be willing to pay extra for sustainable produce from retailers, according to a new survey. Meanwhile, six-in-ten consumers said they would avoid specific materials being used in their goods – placing pressure on retailers to adapt, or face a financial hit.

The importance and focus on sustainability is increasing, as much in the minds of consumers as anywhere else. While this presents challenges for business which are slow to respond, it also presents significant opportunities for businesses, both to satisfy changing consumer behaviours and to spur innovation.

Having polled a sample of 3,000 consumers, L.E.K. Consulting research suggests consumers have reached a tipping point, turning their backs on unsustainable products. 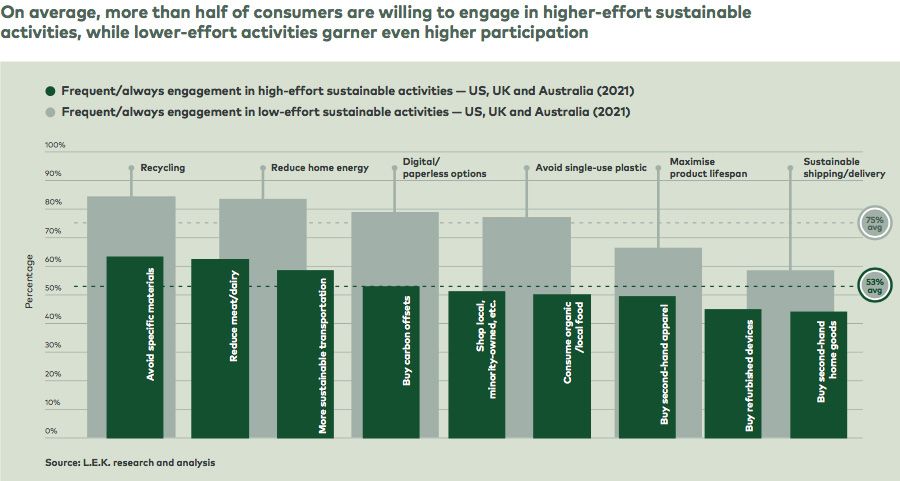 Over the past three years, consumer concern has reached new heights, with the number who claim they care somewhat or a lot about sustainability growing by 18 points, to hit 68%. Among this majority, there are also many consumers who are happy to ditch traditional brands that fail to meet their personal sustainability criteria and are willing to pay a premium for brands that live up to it.

Mark Boyd-Boland, Partner at L.E.K. Consulting in London said, “We believe it is critical for companies to understand consumers’ evolving attitudes about Sustainability. Doing that – and responding effectively – will ultimately dictate the success or failure of businesses and brands.”

L.E.K. Consulting’s survey delved deep into consumers’ sustainability attitudes both in their living and spending habits. The researchers polled respondents to find out which policies retailers deployed were most popular – and in the process illustrated where the bulk of the sustainability opportunities for retailers lie.

The largest number of consumers said that more than 60% of consumers avoid specific materials in their goods – something that could range from single-use plastics that have been documented as clogging up global waterways, to the use of pesticides which are at the root of collapsing land-based ecosystems around the world. Meanwhile, a similar number were scaling back their consumption of meat and dairy – with cattle farming reported regularly to have eaten into the world’s forests, while having a huge carbon footprint.

L.E.K. Consulting also became the latest in a succession of researchers to claim consumers would pay more for the privilege of their retailers using less environmentally destructive practices. While the US led the way on this front, with around 56% stating they would pay a premium for sustainability, the UK’s consumers hovered around the 50% mark.

UK consumers were most willing to pay over the odds for sustainable pet food and products, at just over 30% of respondents. Similar numbers would pay extra for clothes and footwear, or home goods and furnishings. Meanwhile, this fell to around one-quarter with regards to food and beverages, or household basics and cleaning materials.

This variation may highlight one of the problems with this line of logic, however. By making sustainability a matter of virtuous consumption, the greening of certain industries is notably less pressured by ‘voting with the wallet.’

With the UK in the grips of a cost-of-living crisis, the idea of households paying more for food, with its price already inflating faster than their wages, it is unclear how these consumers can be expected to pressure food producers to be more sustainable. In comparison, income brackets who can, in spite of the fall in living standards, afford to spend money on home furnishings and fashion, have more potential to push retailers on sustainability – but there are fewer of them.

Importantly, a growing number of UK residents are aware of these limitations. Another recent study, this time by Eden McCallum, noted that as they exhaust behavioural changes as a means to battle climate change, many consumers are considering what larger organisations they are stakeholders in can do to prevent climate change, and ecological destruction.

Around 79% of consumers the consultancy surveyed said the government actions were most important to boost the country’s sustainability, followed by 76% saying the same of companies – ahead of 72% for individual actions.